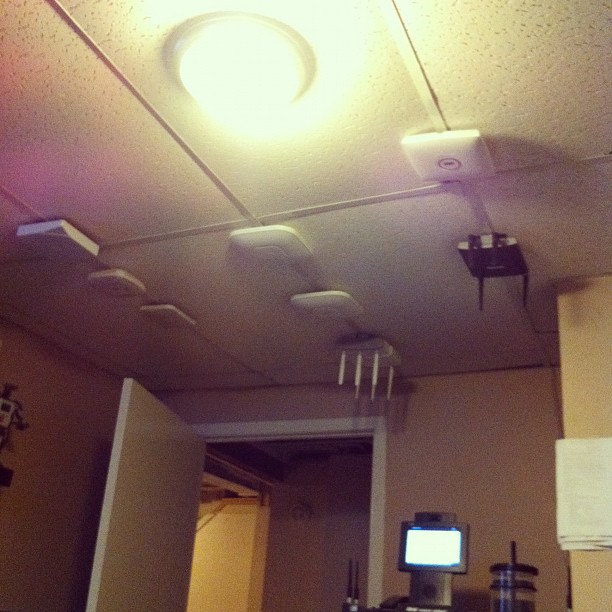 Hopefully over the course of the next few weeks I’ll finally be able to go through all the equipment that I received from the recent Wireless Tech Field Day 2 and start putting up some posts, but in order to do so I had to first get them installed in my lab. Now most people would think this is a small factor when choosing a vendor, but if you have ever had to swap out an AP for whatever reason you will understand the purpose of this post.

First up the good:
Cisco (Yes Cisco was not at WFD2, but I’m still including them) & Meraki are by far the easiest APs to install to a drop down ceiling or other. Their mounts are metal and feel sturdy to me. I didn’t feel like I would break them if I had to pull the AP down multiple times during install. Total install time: 2 minutes.

Now the bad:
Aerohive, while their bracket was fairly easy to remove the AP from it’s all plastic. I also had issues trying to get it to go onto my T rail. They won points for making the AP at least easily removable from the mount. I like it when I can leave the mount up, but take the AP down. This works better for RMAs. But what is with this plastic? Am I the only one that wants a metal mounting plate? Total install time: 4 minutes.

Finally the ugly:
Aruba, I felt like I was going to either break the mount or skin my knuckles trying to get that thing on the AP. I do believe a few choice words were used while trying to snap that into position. I also can’t see how this would work if you had to take it on and off. Now for mounting it to the T rail, that took way too long to do! I couldn’t get it to latch on properly where I felt that it wouldn’t fall off and hit me on the head. Total install time: 9 minutes.

I also factored in another detail when doing the testing: survey setups. When I need to do a site survey I want to have the AP mounted properly up against the ceiling. This is not always easy to do, but Cisco and Meraki would still win that battle.

Below you can see pictures of all of the mounts as well as my tripod mount that I would attach the bracket to for surveying purposes.