For awhile now I’ve been curious about the growth of the CWNE. If you look at the program over the course of its history you would notice that until recently there wasn’t a lot of CWNE’s out there. It’s only been in the past few years that the number has increased a lot. What has caused this sudden increase in numbers? Was it technology related? Marketing of the program? Easier to achieve? Plenty of questions that one would ask so I set out to correlate a bunch of data that is already out there via blogs (for example Zaib’s work over at http://wlanbook.com) and twitter announcements from CWNP. I created a master list, listing all 257 CWNE’s (as of this post) with their name, date, and region. I was able to scour sources and find all but 1 name. Dates on the other hand I was missing a lot of as well as regions. A quick email to CWNP allowed me to get the dates and regions, but I quickly found that the dates were going to be problematic. Did you know that the CWNE when it was first announced was a lifetime achievement? Because of this not too much importance was put into knowing the date one received their CWNE, after all you didn’t need to renew every 2 years from that date so it’s easy to forget I guess! Having all the regions at least allowed me to have an accurate geographical breakdown of where the CWNE’s are located throughout the world.

Visualizing the data at CWNEMap.com

So armed with all the data I could figure out and collect it was time to look at it and make some theories about the program. From the initial data it appears the first set of numbers were handed out in two large groups: #1 – 23 in July of 2006 and #24 – 44 in December of 2006. Unfortunately for me and the data I don’t have exact dates for #45 – 81, I can only speculate that they are between 2007 and April 2010 when my data starts again. 2011 was a very slow year, only 1 CWNE was awarded during 2011. 2013 marks the start of the consistent growth that we see today in the program. At first I started wondering did the growth correlate with PHY layer enhancements and new standards, nope. The growth started after we started having an influx in client devices and mobility started taking over our lives. In 2007 the iPhone was launched, whether you are an Apple or Android user, this marked the start of mobile lifestyle so many live today and caused a noticeable surge in Wireless devices. But the surge in numbers didn’t happen until 6 years later, why? When I look back at my career 2007 – 2009 was still early infancy of Wireless. 802.11n wasn’t ratified until 2009, devices didn’t start showing up with the final standard of the PHY until late 2009 and early 2010. This is when the clock started it seems, 2013 was a surge year of CWNE’s which now makes sense as the application requirement is 3 years of work experience. We have a lot of consultants and engineers that are finally hitting that 3 year mark where they feel they are ready to join the CWNE ranks. As the ranks grew the number of evangelists for the program increases and more people become interested. Organic growth starts to happen without the need to market the program as strong from within CWNP. Conferences like WLPC start holding boot camps and sessions to encourage people to go down the certification path. 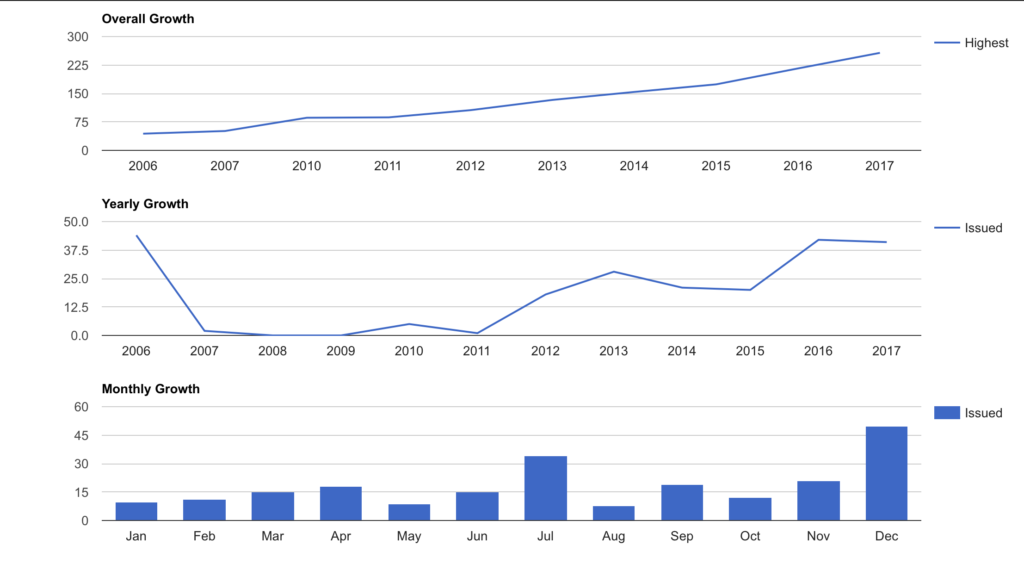 Why the geographic disparity though? Why is it that the US has a staggering number of CWNE’s compared to other countries? One theory I have on this is simply the application process, it’s an application not a test! Many certifications are based off of simply going to a proctored testing center and taking a computer based test, much like the P level tests and the CWNA. Once you get to the CWNE though there isn’t a test, did you know their used to be one though? The process is fairly straightforward: find some endorsers and write 3 essays. Do you know how hard it is to write 3 fluid essays? For some it’s really hard, harder than a test! Now imagine if your native language isn’t English, it’s even harder. Now I’m certainly not advocating they bring back a test, there is a reason programs like the CCIE and Aruba expert certifications aren’t solely based on tests: too easy to cheat and doesn’t allow you to show your expert qualities. This is where the main part of the project comes into play: introducing https://CWNEMap.com. Not only is this a site where you can see the trends over the history of the program but also where you as a CWNE or future CWNE can sign up. The goal here is that you could be connected with hopefuls that might be looking for a mentor or someone to review their essays. You can put as much or as little information as you want to in your profile after signing up with one of the available social accounts.