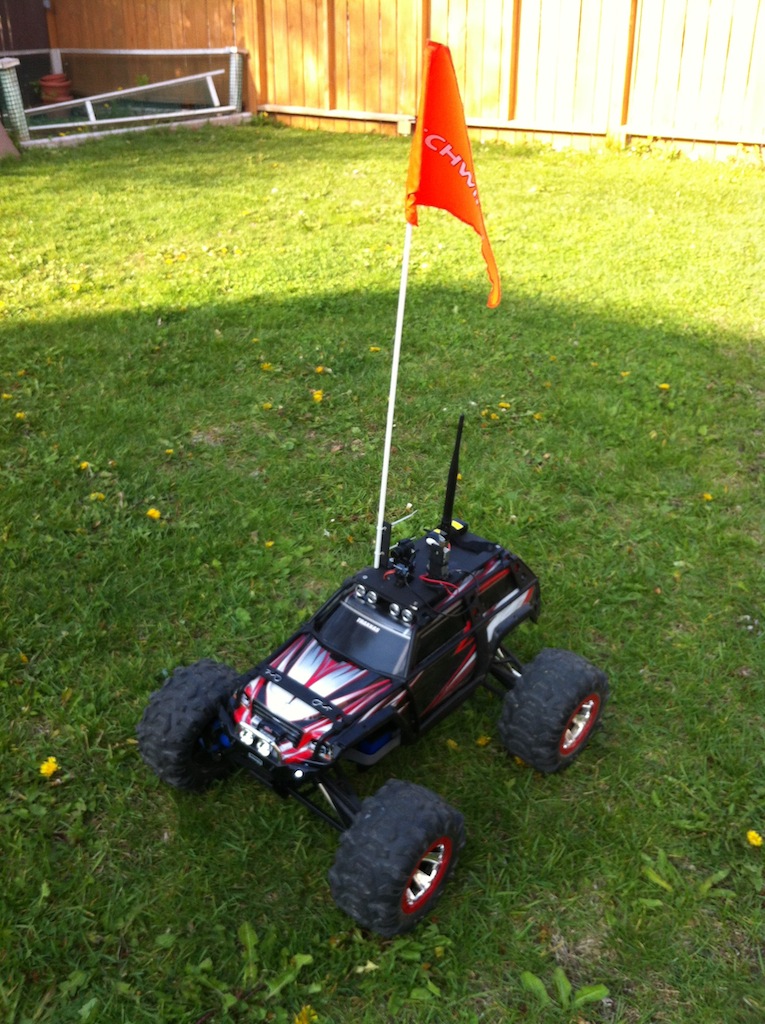 What do you get when you combine skills from an RC hobbyist with a Wireless Engineer? A remotely controllable truck with video down-link.

Over the past few summers I’ve been learning how to fly RC airplanes and have been fairly successful at them being able to land an RC plane on the water and fly from our pontoon boat while cruising around the lake. The end goal for the RC planes is to be doing UAV’s. The platform is nearly complete as I have all the components and just need to take that leap of faith and program the arduino with a mission plan. While I work up the confidence in my build I decided to get an RC truck (I’ve owned 4 different ones, still have an electric and nitro Traxxas Stampede) that could be used as an urban rover. I picked up a Traxxas Summit because of some of the features it has such as: remote 2 speed transmission, remote locking front and rear differentials, 4 wheel drive, and size. This truck is huge, it’s a 1/10 scale RC truck. It has a 16″ or so wheel span with an overall length of almost 2′. The larger the vehicle the more stable the video feed is going to be. I coupled this truck with a 2.4GHz Futaba 7C RC transmitter.

But now for the fun stuff. Driving the RC truck using LOS (line of sight) is one thing, but how about driving it around the block from my deck? 900MHz video down-link to the rescue. I’m using a 500mW transmitter on the truck with a small camera mounted to a pan/tilt assembly so I can freely move the camera 180 degrees left right and close to 180 degrees up and down. This video stream is received by my ground station box that houses a 7″ LCD monitor and HP mini (this is more for the UAV to do mission control from). The ground station also has connections for video goggles for complete immersion into the FPV concept. While using the goggles I can’t see anything else other than what the camera sees. Mounted in the goggles is a head tracker which when enabled will control the pan/tilt servos moving the camera where I look.

Whenever I start roaming around the neighborhood with this people come out of their garages and try to figure out where the person controlling the truck is. I’ve managed to go around both halves (block divided by alley) of our block with a little bit of video distortion. I’m looking for some old Tonka truck bodies so I can modify one to hold the camera and everything inside the truck instead of on top of it like I have it. I’m also looking to add bi-directional audio and maybe an ipod shuffle for music.